In the late afternoon, on the chaotic day that my father-in-law died, this fig tree came into our lives, offering joy, laughter, and friendship. Although my father-in-law had suffered several previous heart attacks, on the day before he passed away, he was happily dispensing pharmaceuticals in our family drugstore. He told my husband and his brother to have a great fishing trip, and he’d see them when they got back.

The next day, my father-in-law became ill, and my mother-in-law accompanied him by ambulance to the city, about an hour away. We were sure he would be okay because, historically, he was a survivor. My sister-in-law and I were shocked when we received a call to say he had passed. It took a while to reach the person who could notify our husbands by radio at the isolated fly-in fishing camp up north.

Later that day, as I sat on the couch watching my two small daughters play, I worried about my husband. I knew he would be devastated by the news. I worried about my mother-in-law, now alone in a big city hospital and likely in shock. I worried about who would write the obituary. My thoughts kept swirling until the doorbell rang. There on my doorstep stood my girlfriend, holding an armful of surprises, her two small sons beside her. She brought a bottle of wine, a bucket of Kentucky Fried Chicken, and a fig tree that stood about a foot high. It was a perfect selection of gifts. The children played, ate, and fell asleep. She stayed with me until my husband came home. I don’t remember her carrying her boys out to her car. I don’t remember talking with my husband or even going to bed. I remember feeling calm in the presence of my friend and the little tree.

That was 1980, and the little plant has grown into a real tree. We named it Grandpa John after my father-in-law. One by one, each of our grandchildren played on a blanket beneath his branches. We often talk to him as we walk into the kitchen. We have hauled him with us through three moves, and I have transplanted him many times.

For several years now, I have known I needed to get a bigger pot for Grandpa John, but the longer I delayed the task, the more daunting it seemed. I believed I would have to smash the earthenware pot to free his tightly bound roots. I couldn’t find a pot that suited our needs, and I could tell this was going to be a next year project.

I remembered receiving a gift card last Christmas, introducing me to Amy’s Plantscaping. I went to her website, and there she was, planting an enormous tree that dwarfed her completely. I asked if she made house calls, and we immediately made an appointment for her to assess the situation.

While she was visiting, I showed her some of my other plants. I told her about the jade, which my mother-in-law gave to my daughter in 1999. My daughter gave the jade to me when it got out of control. I told Amy that we would transplant the jade at a later date. For this time, we had to choose the perfect pot for Grandpa John, order it, and set a planting date. 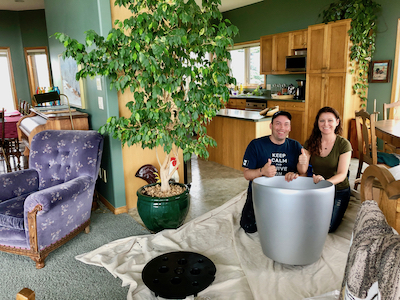 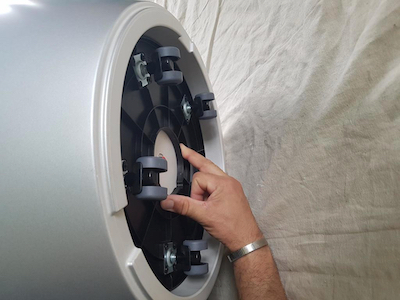 When the day arrived, I was happy that Amy brought her husband Trevor along because I was sure the project would require extra hands. It was quite a process. First, they built the pot, which is a Lechuza with a unique watering mechanism. The pot also comes with wheels that fit inside the bottom of the container. Amy and Trevor were able to answer all of my questions about plant care. They even managed to save Grandpa John’s old pot, and Amy suggested using it as a new home for the jade, we fondly refer to as Grandma Marjorie. She decided we should take time to transplant Grandma Marjorie that morning. I was delighted!

When the potting was complete, Amy took the time to prune both plants. Trevor patiently supported the jade trunks with string and told me his reasoning for every manoeuvre. It looks like Grandma Marjorie is playing Cat’s Cradle.

As Amy and Trevor drove away, I felt like the plants were smiling. My mother-in-law Grandma Marjorie passed away in May of 2018 at the age of 98. A widow for 38 years, she remained in love with John until the very end. A few months after her passing, during the Christmas season, her jade blossomed for the first time. It was a sign.